What we have worked on the past few days :
- Got the rockets from the mothership move like in Deluxe Galaga. Was not easy to get it working again.
- Mothership moves onto the screen from random directions (and fires the rockets)
- Lots (most) of the original pixelated graphics is done.  Kevin is working hard on the enhanced versions of the graphics.
- We have been a little busy with other stuff also.. Simon got some new toys and had to reinstall his PC.

What we have done today on Deluxe Galaga Reborn :
- Better Starfield - closer to original speed and density. Add original star animations for warps. Warp on W key when in play screen
- Move the x2 and x5 to be more central in the side HUD's. Also changed color tint on the sprites
- WARP logo is possibly too low at the moment. Moved it up a bit... and it will show on start of warp and hide after warp
- Fixed detection of all EXTRA and animates them. Add life or armour or 1000000 points
- Verify final bullet for player super triple shot with scooped aliens (scooped alien uses regular players middle bullet, 2 colours)
- Fix bullet angles, speed and spread, find timing for one to fix all (hopefully)
- Added in functions to update the players score and the hiscore on top of screen
- Rip ships thruster for warp
- Add truster flame to ship when warping
- Added in Version number and build number with auto update on About screen

Press E to build up the EXTRA in the side HUD, press W for a warp, 1 - 9 for weapons. ESC to exit

Here are the links for the test versions:

What we have done today on Deluxe Galaga Reborn :
- Made a script to update all of players info in the side HUD.
- Add the 2 frame animations for all player shots (on single double, triple shot bullets)
- Capture War I Plasma screenshots, bullets and video from emulator. Almost got all gfx and sfx now.
- Recreate the star field with the warp sequence. Not completely done yet...
New test version for PC/Mac/Linux tomorrow night.

I have now uploaded a test version of the new game (PC and Mac)  Files are inside zip files and you need to unpack that and start the game from there. Some keys:

Right Cursor : Move to next menus screen.
Left CTRL / Command on Mac :  "Start" the game and lets you fire bullets.
Keys 1 to 9 : Select a different weapon.
Space : Add random explosions around the screen.

Here are the links:

Here's some info on something Simon and I have been working on the last few weeks. It will be a game on its own at first but later i hope to also include it in Warblade MK II as a bonus "play mode". I have now given up trying to make a living on other new games, it's close to impossible to get new games noticed on the IOS AppStore. It's only the really big companies and very lucky ones that release at the right time with just the right concept that have any chance of earning any money, IMHO. This new game will help me a lot with getting back into Warblade MK II development and for the first time in years I actually had a bit of fun when me and Simon were working on this. With me coding and him grabbing gfx and sounds, testing and discussing it along the way, it was nice to see this start taking shape. We almost have all the original graphics and sounds now and Kevin is also helping out with a bonus for all that might play this new game. I hope to be able to release close to daily builds (or as often as I feel I have something new and interesting for you to check out) for PC and Mac. We hope to make this pixel perfect to the Amiga version. Have you guessed what it is yet? Please check out the screenshots below from our latest builds. P.S. Kevin is hard at work on finalising poster/postcard art to be sent out and we have been checking out 3D printing shops and businesses to get those Warblade eagle style trophies made. We are still very grateful for the Ulule pledges, we have not forgotten... 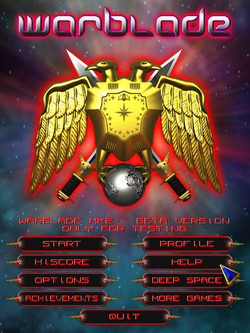 Here is a screenshot from the windows version of Warblade MK II. It shows the new main screen. NOTE! This is from the windowed mode and not the fullscreen mode. Windows 7 seem to have a problem with capturing screenshots of fullscreen openGL graphics. 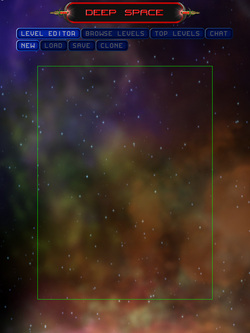 Early version of the DEEP SPACE menu screen. Here you will find the level editor, browse online levels to download and chat with other users and other stuff.

Click on image to see bigger version!
Update 20.12.2011: I have now started on defining new level structures and data.  New levels will use bezier curves for very smooth movements of the aliens. I have defined a max of 20 alien waves per level and 30 curve sections per wave.  There will be controls for positive and negative acceleration at each curve section, so aliens can slow down or speed up as they move along the wave. 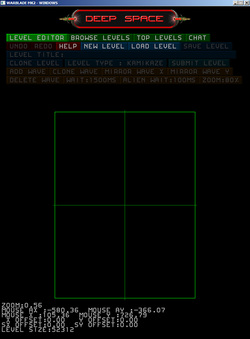 Update 24.12.2011: Added a lot more buttons and getting zoom to work. Experimenting with a drag mode, but not quite happy with that for now. 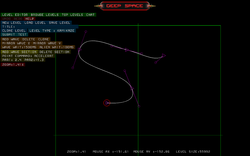 _Update 30.12.2011:  More work done to the level editor. In fullscreen mode you can now use the whole screen for editing. Buttons will take up some space, but will add key to hide those when not needed. Can now add in new wave start points and curve sections. Waves can be moved and curve points can also be moved. On my PC the editing seem to be very fast even with lots of waves and curves. No optimizing done yet.